The Potent Power of Menopause

Previous Next
The Potent Power of Menopause 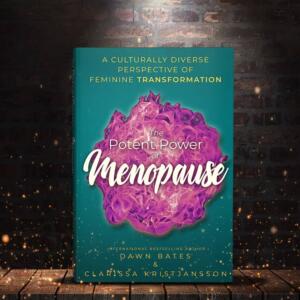 Recently there has been an increase in the number of business leaders talking about superpowers.

Spinning around in phones boxes then emerging with knee high boots, tights on underneath my knickers, with a cape hanging off my shoulders, doesn’t really appeal to me to be honest.

And not just because wearing tights without my undies rubbing up against all that is divine and sacred, would be terribly uncomfortable,

But because knee high boots on the beach would be a daft idea – and like my mother says “I may be daft but I’m not that daft!”

(I’ve begged to differ with her on that a number of times and only just escaped a clip around the ear but there you go!)

Ever since the age of 14 when I started to fully understand the power of my ovaries, and how when blended with the human version of a tadpole we get to create human life from within us, I knew there was nothing I couldn’t achieve if I put my mind to it.

The same cannot be said for other women, and bringing together The Potent Power Of Menopause: A Culturall Diverse Perspective of Feminine Transformation has been one of the most eye opening journeys of working with women in my twenty plus years of being in business.

And not just because of the women – and one man – who took part in the final edition of the book, but the amount of women who were a ‘HELL YES’ to the book…

And then a ‘HELL NO!’ when it came down to investing the time, effort and money into collaborating into making the book the huge success it already is, even before we go live on the 11th May 2022.

It is no secret that women are some of the most underpaid and under recognised individuals on the planet. I say some, because child labour is still happening and to not acknowledge the children who work harder than a lot of women do, would be really rather amiss of me.

Let me take you back 2 years when I was a guest speaker at a Women in Compliance event, hosted by one of my fellow students at Oxford University.

What I heard from a few of the women at the event was how men were holding women back in the workplace and how there was still a wage gap between the sexes surprised me.

I sat there wondering why these women, who were still moaning about the gender gaps, had not gotten together and set up their own companies – especially if they truly wanted everything they were saying they wanted.

When I said this during my time to speak there was a eery silence, because many of the women realised that it was in fact themselvves holding themselves back, and they were casting the blame in the direction of the men.

Whether they realised it was due to their own fears of succeeding in business is another matter, or that the fear of either not knowing how to set up a business or having to lose their large 6 figure salaries whilst they built the business was another thing.

A few short months after this event, I had a call with a woman who had been liking my posts on LinkedIn which were calling out those who made excuses for not being successful, the ones who talked a lot about success but were not doing whatever it took to get to the level of success they wanted.

She wanted to write a book with me, and when I heard the concept of the book, I was ALL in. By the end of the call, after I had explained what was involved, she handed over her credit card details and said she was all in for the 6 months it would take to complete the book and get it published and launched.

Payment having gone through, I got to work setting everything up for her behind the scenes which included creating her very own Dropbox folder with all the files, contracts, exemplars and pre-work that was needed.

I evaluated her online presence, the words she used, the posts she had engaged with others on, the messages she put out and going over the notes I had made during our call I could see a HUGE potential of success in all areas of her presonal and professional transformation.

Looking at everything I had gathered on this woman, I then started mindmapping out a possible strategy for her book, her business expansion and making notes on who in my carefully curated business network of twenty plus years would be best suited to help her succeed in her mission.

Then her second payment didn’t arrive, and then the emails started to arrive. Panic, stress, anxiety, excuses, more panic and they weren’t arriving every other day. No, they were arriving every ten to fifteen minutes every day.

It didn’t matter what I said to this woman, or how I tried to reassure her that everything was going to be fine, that all the emotions coming up for her were a normal part of the process for many people writing a book similar to hers, she came to the point of cancelling a 6-month contract with me.

A blessing in disguise, even if the impact of losing a 6-month contract was a financial blow – something she had not considered because she was too wrapped up in her own anxiety.

Then two other women who were ‘ALL IN!’ on a book we’re working on together started to fall behind on the tasks set, their invoices were not being paid, communications were not being delivered ‘because they were busy and didn’t have internet’ –

And yet here they were spending time on Facebook, clearly hadving internet to get the work needed done and able to send updates on their progress.

Apparently the amount of work involved was too much for all three women, and investing in themselves and their business with time, effort and money was just not something they were willing to do – not at the level they declared they wanted to succeed at anyway.

Pulling together The Potent Power of Menopause a similar thing happened with a woman who’s story would have been perfect for the book. She would have added quite a few different cultural perspectives and an alternative option in how the menopause was dealth with in her country for many women.

And yet again, when it came to this woman putting her money where her mouth is, she bailed and got offended that she had been asked to contribute to the fees involved in everyone working together to put menopause on the map – the original working title for The Potent Power of Menopause.

Over the years I have seen this pattern of behaviour in so many women. They say they want the success, they want the results, but they are just not prepared to put the time, effort or money into getting what it is they want – and then they start to bitch about the women who go on to create the success they refused to be part of.

Some of my female authors who have stepped up have even had women who chose to bail on the books give them a 1 star review; and then these spiteful women wonder why the do not have the success my clients have had.

Being a woman is a powerful gift, and like I said at the top of this blog entry, when we harness the power of our ovaries, we can give life to incredible humans, and ideas.

The only choice we have to make though is whether we are willing to go through the pregnancy of our ideas coming to fruition, the discomfort of the idea growing, the pain of labour and the emotions of the birth – followed by the years that follow nurturing the child we have chosen to give birth to.

Working with the ladies on The Potent Power of Menopause has not only helped to restore my faith in women, but has gifted me a deeper connection with what it means to create a sisterhood at this time in our lives.

Some of these ladies I was already familiar with, some I was friends with, some of them were new to me, and now all of them are special to me.

The sisterhood which has been created between us, and the ladies on our review teams, is exciting and with only a couple more days to go before the pre-order link goes live, I can already feel squeals of delight bubbling up inside of me.

These women, all from very different levels of expertise in business and book writing, spanning five decades, six countries, four continents and many more timezones, have supported each other, cheered each other on and made me feel so proud of the community we have created.

And to have the masculine energy of our solo man on the team, grounding it all simply by being with us and offering us all – and our readers – a different perspective of how menopause is a gift for men as well, leaves me feeling so humbled and blessed.

We’ve all created something so magical, something that has been written for all kinds of women to be seen, heard and recognised.

Different styles of writing, different topics of conversations, different insights from around the world and through the last fifty years, all coming together to support the women of today, and those of the future, and the men who love us all.

When we as women understand our superpower is in moving forward into the unknown, leaning into the fear, finding solutions to our excuses and stepping up to inspire future generations of women, knowing that we don’t have to do everything by ourselves, then we get to rise, and become part of the UpRising that is needed.

As women we have been told we can’t, that we are broken and need fixing, and that we are weak and need protecting – not just by men, but by other women and ourselves. It is time to erase that narrative and it is time to join the UpRising that is happening the word over – beginning with the UpRising we know needs awakening within us.

And the sooner we all step up, lean in, the more success we can all enjoy together.

*For those women who would like to join me and the group of women from around the world who are joining forces on creating a Phoenix UpRising like never before, join my community and sign up to my weekly-ish emails where you will be invited to monthly gatherings, collaborations, get news on up and coming book and podcast releases, and special offers on all my products and services.