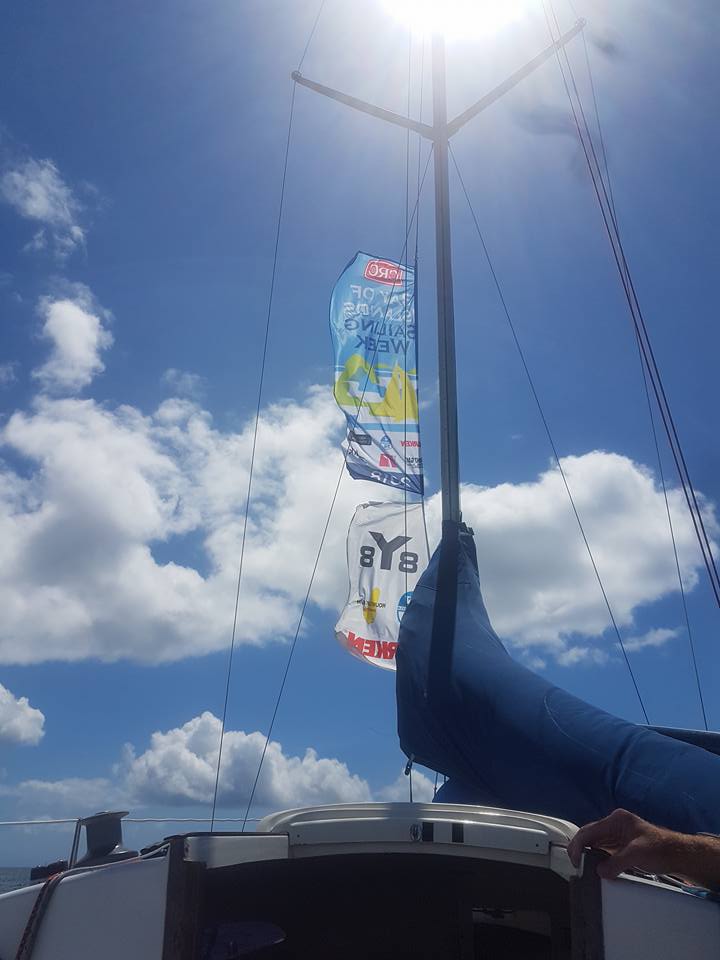 Having only just seen my two boys of at the airport, I knew I had to knuckle down and get on with business. The business of launching The Mermaid’s Guide to Hitch Hiking, a blog, vlog and eventually a book about each country I sail to and around, with an all-encompassing book at the end.

So I head off to Westhaven Marina as recommended by Gareth at Bayswater Marina and head over to the Royal New Zealand Squadron, via Swashbuckles (you just have to try their calamari and their wedges! Amazing! Very large portions, but impressive and not a meal I could finish!) Any way, I digress!

I arrived at the Squadron, as recommended by a few people for around 9pm.  The local Rum Races were taking place and everyone would be back at the Squadron by then, so it would be a great place to head up to the Bay Of Islands Sailing Week – an opportunity not to be missed.  I had work already sorted out on the safety boats and behind the bar, so everything was set, other than my passage up there.  No worries, the universe would deliver, I had faith.  Faith in the Universe, faith in myself and faith in the sailing community; and what happened next didn’t disappoint!

I met a great guy called Moulet, a self-confessed passionate, competitive racer, and not always the gentlest with his words.  I loved his honesty, his party vibe and his generosity of self.  Not only did he allow me to sleep on his launch boat for 3 nights, but he also helped arrange passage for me up to the Bay of Islands from Auckland with the Commodore of the Royal New Zealand Squadron, Steve Mair.  Another great guy, and a friend of a friend back home in the UK.  Small world hey! (And it’s getting smaller!).

I then met a guy called Rusty, who arranged for me to stay on a boat belonging to a local legend named Truby, a true gentleman by all accounts, and proven when I met him, even if for a brief moment.  (Tapping into my instinct has become my saving grace, I mean come on, why would I stay on Moulet’s launch if I didn’t trust him? A conversation we both had about how so many women are afraid of travelling alone, afraid of being raped in their sleep by some unknown, but when you trust your own vibe, you attract the right kind of vibe).

Speaking of attracting your vibe, I spent the day in the Squadron learning more about it’s history and the amount of trophies it had won over the years.  Whilst writing up my notes, whether I will include them or not is besides the question, but an absolutely delightful gentleman named Guy King approached me and what followed next was so wonderful.  Not only did this guy ‘Dawn’ me by handing out contacts and ideas, something I do to people back home in the UK, but he was an absolute pleasure to chat with.  He got my vibe, and my spirit, and hooked me up with an equally beautifully soul called Sarah Thornton, a publicist here in New Zealand – the go to book publicist if you want to get anything done.  We’re having lunch when I get back from Waiheke Island. And I can’t wait!

But again, I digress… where were we? Oh that’s right, the Bay of Islands Sailing week!

Sailing up to the Bay with Steve, a young Australian called Peron and a young girl called Anna, on Steve’s boat Clockwork was something of an adventure for me.  Being used to sailing on Tall Ships, sailing on this bespoke designed race boat was filling me with giggles.  Not only was there no back to the stern of the boat, other than a couple of plastic coated wires, there was a steering wheel instead of a tiller.  There were digital displays, and a rapid response to any slight movement to the boat, and a simple mesh curtain to hide your modesty when going to the toilet – certainly not what I am used to! But hey, life’s for living and making the best of every situation right? I certainly managed to do some core and glute exercises whilst navigating my way down to the bow of the boat – much needed after 6 weeks of doing sweet nothing for 5 weeks, other than swimming in the ocean!

With the rain lashing down and the sky grey, the scenery around us looked nothing short of a movie set… seeing the Black Pearl sail around the corner after a run in with Davy Jones wouldn’t have been out of place that’s for sure.

Passing Sail rock, the Island behind it, looked like a crocodile sleeping, and I got to thinking ‘Hmm I haven’t seen any dolphins yet’ so I asked “Will we see any dinosaurs on the way up?” Everyone looked at me in a confused way and I thought I had slipped into Arabic mode, but no, I had said dinosaurs!! Where the hell did that come from?? Hahaha! Repeating myself, this time saying dolphins, Anna assured me we would definitely see them closer to the Bay. Excited much I can tell you!

Steve disappeared down into the hull of the boat and then popped up with a cheeky grin, anyone want a coffee? And to say it was the best coffee, was an understatement! Those on board know why, and the second one wasn’t too bad either! Definitely central heating for the insides that’s for sure! And with the rain lashing down, most certainly needed.

I took my turn steering the boat, and it was an honour to be given charge of the helm.  Clockwork is Steve’s baby, and of course his Big Boy’s Toy.  As I mentioned just above, the response was very different to the Tall ships, much more dynamic and it took me a moment to realise that the sterring wheel acted very much like the steering wheel in the car; when you turn starboard, the boat goes starboard, unlike the tiller.  If you want the boat to go to port, you move it to starboard.  Confusion over, I settled into lining up marker points in the distance and eased into the role of helmswoman.  Enjoying every moment and having little excited giggles deep inside with a smile on my face, even with the rain running down the end of my nose and off my chin.

Even in this weather, I wasn’t deterred to live at sea; nor was I bothered about the boat being heeled over at 10-4. It was a bit surprising at first, but hey, so was the coffee!

I took the helm a little later on during the night and mentioned to Steve that the one thing I was missing was my walk up the deck and the freedom the all Ships had given me.  On a race boat you are there watching the digital displays, unable to look up at the stars (not that we would have been able to see them anyway, but you get my drift).  Tying the tiller up in position with the sheets (ropes) and being able to gaze up at the stars, or walk up to the bow of the boat, or even nip to the toilet is doable on a tall ship, but not on a race boat.  So my criteria for my future boat is becoming more focused, or rather confirmed.

We anchored up that night in a place called Whangaruru (pronounced Fongaruru I think! Wh = F) and wriggled into the small bunks.  With my stomach growling, and Anna sleeping in the bunk above me, I was hoping she was so tired she would fall asleep instantly.  There is no hiding when on this boat, so if you snore, or have flatulence, be warned, you will be discovered!

Waking up to the beautiful surroundings was breath taking, and I felt very emotional, especially when I jumped into the water and had my morning swim.  Swimming in the water as the sun is rising, sounds of the island birds, and no one else around other than your crew mates… a wonderful feeling.  Steve had already had his swim, but Anna and Peron were not game for it.  Getting back on the boat was not the most glamorous move, but the helping hand was much appreciated.

We continued our sail up to the islands and were blessed with seeing my ‘dinosaurs’ aka dolphins to everyone else, and we were blessed with a beautiful sunny day, with just enough wind in places to sail, but we mostly motored up to the Bay.  The other thing about Clockwork, is there is nowhere to hide from the sun.  You are exposed to the sun as much as you are the wind and rain, so absolute respect to Steve and his regular crew for being of strong mind and character to deal with the sun in New Zealand.  Factor 50 is a must guys, an absolute must.  I was covered in the stuff and still had a red face from the sun, and it’s reflection of the water.  Still, it would make for a great conversation starter that’s for sure.

As we sailed into the Bay, we saw more dolphins off to our starboard side, playing near another boat some 10 meters away.  What I wouldn’t have done to jump in and swim with them, but I had to get to shore so I could find Manuela, one of the organisers of Bay Island Sailing Week or BOISW for short.  It was such a stunning location and yet again the excitement rose up within me when I was greeted by the plethora of boats in and around the harbour – complete boat porn! Ocean, boats, dolphins and beautiful scenery… stunning.  Absolutely stunning!

This was going to be a great week, that I knew for sure, regardless of what happened… and a lot did happen… but that’s for my next blog entry!

And remember, if you wish to support my journey, head over to www.patreon.com/themermaidsguidetohitchhiking where every dollar goes towards me helping another woman achieve her dreams!