I Am Anti-Women’s Rights

Previous
I Am Anti-Women’s Rights 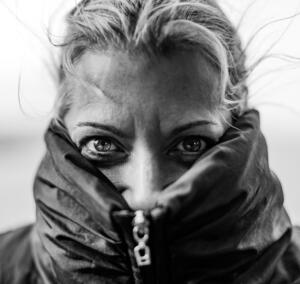 Dawn Bates in solidarity with her niqaab wearing Islamic sisters – a sign of protest which has had many women around the world requesting Dawn remove the image from her branding.

A few days ago I ventured into a conversation with a colleague over the issue of the fines being handed out in Switzerland to women who choose to wear the niqaab.

We were discussing the issue on his LinkedIn profile with a 3rd party.

As the conversation progressed I began to realise a whole new level of stupid and ignorance from those who are in high level positions within companies which have a level of influence.

This 3rd person was a chap from Australia and he had no clue about the history or the cultural complexities of the niqaab. He didn’t know it pre-dated Islaam by 2000 years, and was introduced into society by women themselves, as well as the badawi – Arabic nomads.

Nor did he know the difference between being a Jew and being a Zionist. Oh yes, the conversation went there too.

Now, those of you who know me, and have read my first books, will know I know my stuff, go down rabbit hole after rabbit hole piecing together History, Geography, Theology and Psychology, not to mention Politics, Sociology and Anthropology for good measure.

The thing was, by me defending a woman’s right to choice to wear niqaab, this 3rd party chap came to the conclusion that I am anti-women’s rights and believe in the oppression of women – just because I would not agree with the removal of the niqaab.

If a woman chooses to wear or not wear a niqaab, that is entirely up to her, just like it is up to the individuals who choose to tattoo and pierce their whole faces beyond recognition. Neither are my choice, but my choice is no more or less important than niqaabis and people with tattoos.

Bringing in the oppression of women in Iran and Afghanistan was not part of the conversation, as we were discussing the wearing of niqaab in Switzerland, and last I checked Switzerland was supposed to be a liberated and educated land in Europe, so *should* be adhering to the conditions set out in the Universal Declaration of Human Rights,

Especially as the European Court of Human Rights agreement was ratified by Switzerland on November 28th 1974.

Now the Swiss People’s Party may be against certain freedoms for certain people, mainly the freedoms of those who are not white, native Swiss from generations back and not religiously or ethnically prejudiced, but equal under the eyes of International Law the people of Switzerland are;

Until this ban and fine of $1000 for women choosing to wear the niqaab.

Switzerland are not the first country to violate human rights by banning the niqaab, or the burqa. France, Austria and Belgium have also done so in the last 5-7 years. In fact, back in October 2018, a UN Panel found that France failed to make a case for their ban.

With so many politicians ignorant to the reasons and the legacies behind the niqaab, the burqa and the hijaab, all of which are very different to one another, is there any wonder those who watch mainstream media and follow the dogmatic propaganda which is spewing out all over the place are filled with fear because they cannot see a woman’s face.

And yet, just 18 months ago, the majority of the global population had their faces covered and were told to fear each other after the powers that be had tried to convince us all we were the weapon destined to kill everyone in our family if we didn’t wear the face nappy.

When reading the comments of the 3rd party in the LinkedIn conversation mentioned above, some of them made me laugh out loud at the level of ignorance dressed in the finery of confidence and arrogance by a man who thought he was doing a grand job of defending the women of Switzerland, and yet all he was doing was making an ass out of himself.

One of the biggest problems with this debate though is the fact that men think they still have a say in what women should or should not be wearing. This debate really has nothing to do with men, and everything to do with the women who choose to or choose not to wear the niqaab.

One of the main things in the whole debate that keeps getting missed is the cultural aspect of women in niqaab varies greatly from country to country. The women in Switzerland cannot be compared to the women in Afghanistan nor those women in Iran. Many do not even consider thinking of the women who wear the niqaab in Malaysia, or Kenya, but wear it the women do.

Each culture is different and whilst the conditions of wearing the hijaab – not niqaab – is enforced against many women’s will in Iran since the Islamic Revolution in 1979, the niqaab has not been legally enforced.

Yes, women are removing their hijaab in Iran, and why not? It has been forty years since the morality police came down and enforced the wearing of hijaab for females over the age of 9 years old, but again, times are different. More women are educated and with the growth of social media and the internet, new ideas are forming all the time.

Much of what we are seeing is also sensationalist for use on social media, the shock factor, much like when the suffragettes would throw bricks through windows and go on hunger strikes.

We will make you take notice.

And take notice the world did with women burning their hijaabs, just like the burning of bras got people’s attention. It isn’t a new tactic, the thing is, it is just televised and plastered across the various social media platforms and has the anti-Muslims, angry feministas (not to be confused with real feminists) jumping onto something they know very little about.

It has been good for both the anti-Islamic and feministas – it has fuelled their messages that Islaam is bad and oppression of women will not be tolerated;

And just like the smashing of bricks through shop windows by the suffragettes, those who are in support of the women worldwide and seeing this ‘social media shock value’ behaviour,

We are rolling our eyes and seeing the real damage being done – and how the women of Iran and Afghanistan are being used as a scape goat for other agendas, whilst other agendas are being pushed behind the new media circus and frenzy due to the latest distraction.

Does all this mean I am anti-women’s rights as was ‘shouted’ at me on LinkedIn by a man who had very little to no information about the hijaab, niqaab and burqa?

What I am against though is people, especially men, speaking about something that they do not understand and are only taking part in because they want to be seen doing something for the greater good – and to also prove they are not prejudiced against Muslims, not racist, not sexist, not something else the mainstream media may be accusing people of in certain parts of the world.

And for all those who have a problem with my spelling of the words niqaab, hijaab and burqa, when I speak another language, such as Arabic, I do my absolute best to write it as closely to the phonetic way of speaking it.

For those who do not speak, read or write Arabic, I cannot expect you to understand the spellings I have used. How can I when most Muslims in the West and the majority of Arabs raised in the West do not speak Arabic?

I hope for a world where women, and men, are free to choose what they want to wear, and if we can allow men to dress in drag and put on a sexually explicit show and call it ‘family friendly’, then surely we can allow women to express their religious freedoms and wear the niqaab?